This August marks exactly one year since FSU football’s head coach Jimbo Fisher and his wife Candi started the Kidz1st Fund to fight for a victory unattainable in Doak Campbell Stadium.

In 2011, the Fishers received news that their youngest son, 7-year-old Ethan, was diagnosed with Fanconi Anemia (FA), a rare genetic disease that decreases red blood cells, causes bone marrow failure and increases risk for cancers.  To fundraise for a cure, the Fishers established in Aug. 2011 the Kidz1stFund, a non-profit foundation whose proceeds directly benefit research at the top FA research and treatment facility in the nation, the University of Minnesota’s Amplatz Children’s Hospital.

“It’s remarkable how much the fund has accomplished in just a year,” said Dr. Margaret L. MacMillan, Ethan’s doctor and co-director of the Fanconi Anemia Comprehensive Care Clinic at the University of Minnesota. “The fund has allowed us to focus our efforts, with more money available for research so we can get closer faster to the ultimate goal—a cure.”

$500,000 in research funding wasn’t the only help the Fishers’ fund garnered in the first year, though. After 37 individual donor drives, the fund added 1,710 names to the National Marrow Donor Database. One of the individuals who signed up because of Kidz1stFund also saved a life by donating marrow to a matched patient.  “To me, that’s rewarding because another person out there has been helped by the benefits of the fund,” Fisher said. “Had we not done the drive, it may have taken longer to find a match, or it may not have happened at all.”

Thankfully, the horizon for treatment research of FA is bright, especially with increased funding. 15 years ago, the survival rate of patients with FA was 20 percent to 30 percent. Fifteen years later, the survival rate is 85 percent. The goal is now 100 percent.  “The research takes time, but with help of funds been able to see the change happen sooner and maybe in a few more years it will be 100 percent,” said MacMillan, who will be speaking to FSU students this November about the rare disease.  The doctor also notes researching Fanconi Anemia would not only improve quality of life for F.A. patients, but also sheds light on other diseases as well.

“I would like to say thank you to students who have done a wonderful job getting behind us,” Fisher said. “We are so grateful to those who help any way they can. Hopefully we will be supported for years and years to come. With support, we can find a cure.” 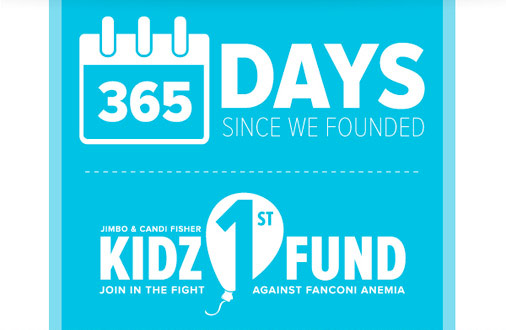 TALLAHASSEE — Jimbo Fisher‘s players gave him the perfect way to sum up a monumental shift in his life.

“They say it all the time … ‘YOLO,’ right? ‘You only live once,'” Fisher, Florida State‘s 46-year-old coach, said to a room of mostly young reporters who erupted in laughter when he name-dropped a popular hip hop anthem.

Yes, YOLO. It’s an acronym made popular by the 2011 chart-topping song “The Motto,” performed by hip hop artist Drake.

While Drake may have written those words to celebrate his wealth and excess, they have held a much deeper meaning for Fisher.

They have become a new way of life.

There are 26 people living in the state of Florida who have the rare geneticblood disorder known as Fanconi anemia.

Fisher’s 7-year-old son, Ethan, is one of them. He’s also one of two people in Tallahassee living with the disease that slowly cripples a person’s bone marrow and platelet levels, which can trigger various forms of cancer and other life-threatening complications. With the disease, Ethan Fisher now has an estimated 29-year lifespan.

The Fishers have joined others throughout the nation searching for a cure.

As it now stands, Fanconi anemia has no true fix. Bone marrow transplants, medications and radiation treatments can delay and stunt the effects of the disorder, extending the life of patients, but there is no way to completely rid a person of its deadly long-term effects.

Thanks to Kidz1stFund’s partnership with the national Be The Match bone marrow registry, the Fishers also added 1,710 new names to the database of people willing to donate bone marrow to those in need. The newcomers included one person who has already provided bone marrow that saved a young cancer victim’s life. Additionally, Kidz1stFund’s bone marrow drives have registered more than 900 minorities, helping offset critically low numbers of registered minority donors, Candi Fisher said.

When speaking about an older Fanconi survivor, she unintentionally emphasizes that Ethan will get his transplant at the same Minnesota hospital he received his transplant. Doctors believe Ethan is about a year-and-a-half to three-and-a-half years shy of needing a bone marrow transplant.

He currently has no bone marrow donor match for a transplant. No one in the Fisher family is eligible to help extend his life.

Christopher Byrd didn’t have a relative who was a match, either.

But when his bone marrow readings began to slip 12 years ago, an unrelated donor became a match and provided his life-altering transplant.

Byrd is now 30, surpassing previous Fanconi anemia life projections by more than six years. The Orlando native, UCF graduate and attorney, currently lives in Tallahassee and has been active supporting organizations searching for a cure to the disorder

Jimbo and Candi Fisher’s Kidz1stFund celebrated its 1st anniversary and continues to thrive in reaching its mission.

Non-profit raises over $500,000 and starts legislative campaign in D.C. to raise awareness for Fanconi anemia.

Tallahassee, FL — On August 5th, Kidz1stFund celebrated one year of existence and achieved impressive fundraising, awareness and legislative goals in the fight against Fanconi anemia (FA).

In the first year of the non-profit, over $500,000 was raised and donated to the University of Minnesota’s Amplatz Children’s Hospital, doubling the university’s current research budget for Fanconi anemia. The University of Minnesota was chosen because it treats more Fanconi anemia patients who need blood and marrow transplantation than all other hospitals in the country combined. “The funds raised by Kidz1st directly and immediately advance critical research for FA children,” said Margaret L. MacMillan, M.D., Co-director of the Fanconi Anemia Comprehensive Care Clinic at the University of Minnesota. “We are seeing remarkable improvements in transplant outcomes, and are advancing science to help kids with FA survive the long-term effects of their disease.”

In its short existence, the organization has not only raised a remarkable amount of money, but has also used social media outlets to increase awareness about the rare disease. With almost 7,000 “Likes” on Facebook and over 2,200 followers on Twitter, Kidz1stFund has been able to spread the word about ways people can contribute to the cause both financially and also through bone marrow donation.

Through the tireless efforts of the Fisher family, Kidz1stFund has added 1,710 new registrants (983 minority ethnicities, 727 Caucasians) into the National Marrow Donor Program in just its first year. A handful of people have been notified that they are possible matches for a patient in need and, miraculously, at least one child’s life has been saved as a result of a bone marrow transplantation that originated from a Kidz1stFund donor.

“Social media has been a key factor in spreading the word about FA worldwide. We have been able to let people know about fundraising opportunities, as well as shared personal stories of families all over the country fighting FA,” said Candi Fisher. “Once, we shared a picture of Olivia, who was recovering from her bone marrow transplant, and we were flooded with over 400 “Likes” and comments wishing the little angel a fast recovery. That is really encouraging for parents like us.”

Thankfully Kidz1stFund has not been in this fight to raise awareness alone; media outlets have joined in all year long to spread the word. Mainstream groups like the Huffington Post, ACC and ESPN have helped along with numerous statewide newspapers, blogs and magazines. A multitude of individuals, businesses, universities, clubs, and celebrities have joined in, even one Tallahassee high school student created a PSA pro bono for Kidz1stFund which has now been distributed to various states across the US for use on radio and TV.

However, the organization’s mission doesn’t stop here. In February, the Florida Senate and House passed a resolution recognizing Kidz1stFund’s efforts. And just this past July, Jimbo and Candi went to Washington D.C. to meet with various members of Congress, the Federal Drug Administration and the National Institute of Health to start discussions of allowing phase I clinical trials on children with life-threatening diseases and to bring to the attention the challenges faced by doctors when treating children with rare diseases.

Florida Representative C. W. Bill Young has been known for his support of the National Bone Marrow Program and was one of the members of the legislature who has committed to support Jimbo and Candi’s mission. “Families like the Fishers who are proactively working toward a cure for diseases like Fanconi anemia are not only providing hope for themselves, but also to all those who are affected by a multitude of disorders,” said Representative Young.

As for Ethan, his bone marrow aspiration this past March showed no further decline so for the time being he has been given the green light by his doctors to play on the local baseball team, hunt with his father and older brother, and participate in golf & swim camps this summer. While he continues to enjoy his childhood, his parents continue to create hope for him and thousands of others who are afflicted with the disease.