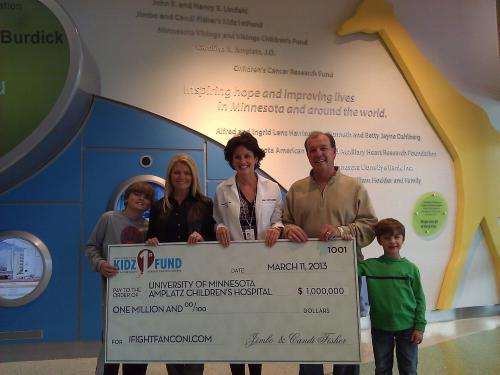 “FA is our opponent and we will do everything we can to fight this disease head on,” said Jimbo Fisher. “Candi and I knew from the beginning we could make a difference by helping to raise awareness and fund research. Through the generous donors of Kidz1stFund, these million dollars will make a significant difference in the lives of FA patients.”

The Fishers created Kidz1stFund after their 7-year old son, Ethan, was diagnosed with the rare blood disorder in 2011. Fanconi anemia is a genetic disease which causes possible birth defects, bone marrow failure and eventually leads to cancer years earlier than the general population. Currently, there is no cure for FA, and yet the Fishers are tirelessly working to help find that cure.

“The world’s first successful cord blood transplant was with an FA patient, and now there have been over 23,000 cord blood transplant performed for a variety of diseases to date,” said Dr. MacMillan. “FA families like the Fishers continue to push for better treatments for this terrible disease, and we hope to one day be able to find that elusive cure for Ethan and the others with FA.”

Kidz1stFund, under the direction of chairwoman, Candi Fisher, made its first pledge of $500,000 in March of 2012 to the University of Minnesota’s Amplatz Children’s Hospital, doubling the university’s research budget for Fanconi anemia.

“We chose the University of Minnesota Amplatz Children’s Hospital because it treats more Fanconi anemia patients needing blood and marrow transplantation than all other hospitals in the country combined,” said Candi Fisher. “And because, most importantly, their team of doctors gave us hope that a cure would be found.”