As the Florida State Seminoles and Michigan Wolverines met on the football field for only the second time in school history, the high-performing players had one thing on their minds: An Orange Bowl victory. But while “the stories” making headlines ranged from NFL-bound stars to devastating injuries, the most inspiring untold story was happening in the stands — where a special Michigan student was enjoying the game, as a personal guest and friend of FSU Coach Jimbo Fisher’s family and the Kidz1stFund team. Here’s her story.

Angela Bedoya celebrates four birthdays a year: the birthday of her two donors, her own birthday, and her re-birthday, the day 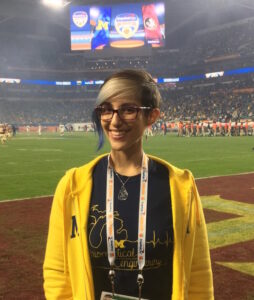 of her transplant. Bedoya, a senior at the University of Michigan, will graduate this December with a degree in Biomedical Engineering and a concentration within the Biochemical field. She plans to research Fanconi Anemia (FA) with the goal of improving the bone marrow transplant experience given her unique position as both a patient and student.

Diagnosed with FA — a rare blood disorder with no cure — in January of 1998 after being hospitalized with pneumonia, Bedoya was told she probably would not live to be 10 years old. Bedoya’s health remained stable prior to signs of chromosomal damage in her bone marrow during her senior year of high school. One week after her acceptance to the University of Michigan’s College of Engineering, she endured a life-changing biospy leading to a rare double cord blood transplant, commonly referred to as a double chimera. Six years later with the blood of two different donors, Bedoya credits Dr. Wagner and the staff at University of Minnesota for her treatment.

In the future, Bedoya hopes to work alongside Dr. Wagner and staff in efforts to help FA patients undergoing chemo, total body irradiation, and additional treatments involving blood and immune systems. She comments, “I feel like we, as FA patients, have to toe the line between being diligent with cancer surveillance and being hypochondriac.” For Bedoya and other FA patients alike, balancing this line may be difficult.

Bedoya finds strength in her unique circumstance, affectionately naming her donors Anita and Bonita based on the blood types A and B. Although the science behind her case is unknown, she believes, “God has blessed me with quite the miracle running through my veins.”

Regardless of their favorite football team, Ethan Fisher and Angela Bedoya, as fellow FA fighters, share a lifelong bond.